With the ever-evolving digital landscape, social media should be part of every brand’s digital marketing strategy. But with so many to choose from, it can become overwhelming. The main players – Facebook, YouTube, Twitter and Instagram – now compete with the likes of LinkedIn, SnapChat and TikTok, so you should research where your marketing dollars are best spent.

A common mistake many brands make when advertising on social media is creating an all-encompassing campaign, placing the same video content on every social media platform. Sure, it’s an easy strategy, but each platform is different and conforms to their own specifications so it’s a good idea to personalise each social media video for your chosen media platform. For example, Instagram, TikTok and SnapChat videos appear in vertical format, so horizontal shooting won’t work for them. 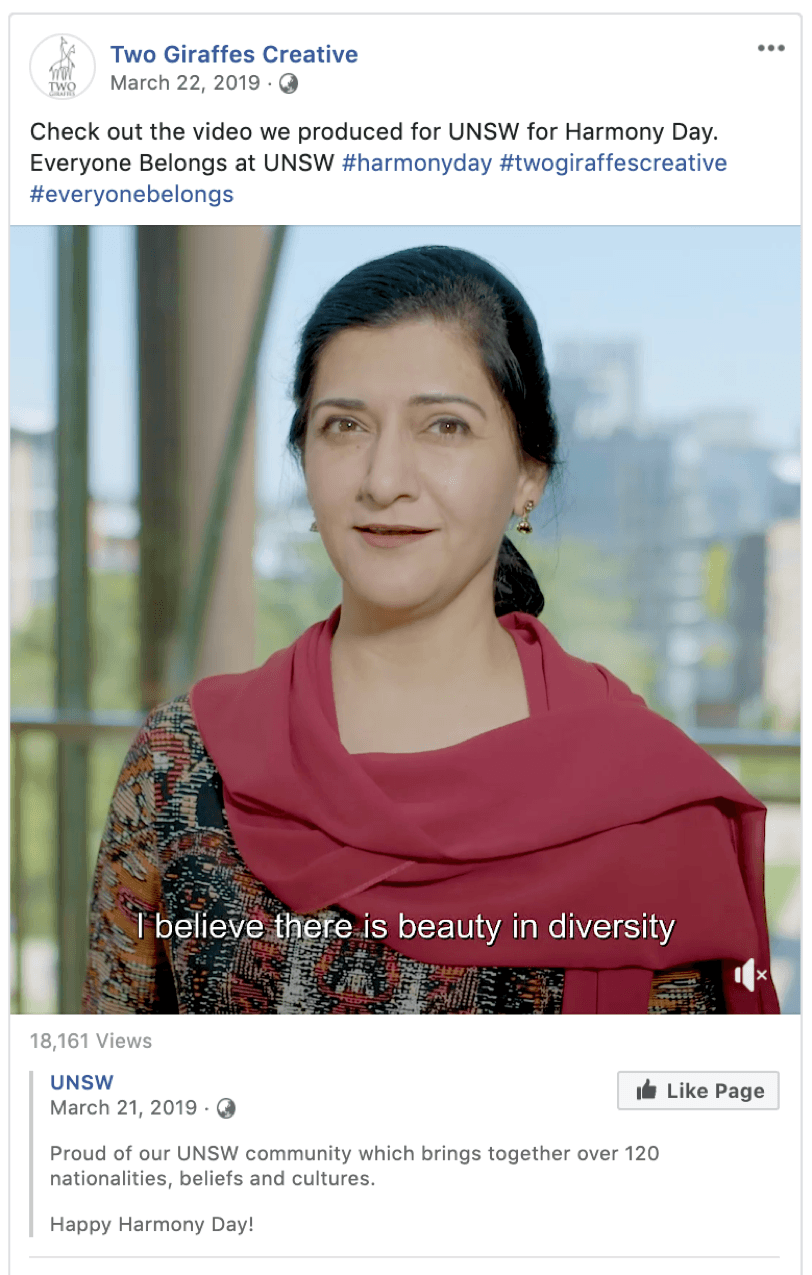 Two Giraffes produced the Everyone Belongs series for UNSW on Harmony Day for their Facebook page. With over 18,000 views, the series was successful in sharing their message that everyone belongs

Hailed as the go-to platform, Facebook is the most popular social networking site across Australia – and the world. In 2019, statistics showed that 71% of Australians actively used Facebook, with Instagram coming in second at 44%.

Facebook owns Instagram, so it’s even easier to reach audiences across both platforms by linking accounts and pages. On Facebook, you can build targeted audiences by selecting ages, genders, locations, interests, and more to narrow down the specific audience for your brand.

Focusing on branded video content, the Facebook video options range from short form designed to be viewed on your phone or videos up to 240 minutes in length, best viewed from your desktop. With so many options, it’s vital to have a clear objective and to understand your target market and how to best reach them. For example, short videos tend to have a high completion rate, meaning they’re watched from beginning to end. If you’re able to squeeze your messages into a short, concise clip, this is recommended.

Pro Tip: A clever and creative video showing real people using your brand or product has proven to be more effective than a simple static photo of the product itself. Sponsored video content for your direct demographic will help to boost engagement rates.

Two Giraffes partnered with Five by Five Global to create cooking videos inspired by video games for Lenovo. This was a great way for Lenovo to engage with its audience via Instagram.

IGTV, or Instagram TV, is fast becoming a very popular tool for marketers. Instagram has over 400 million users that actively share over 800 million posts per day, which makes for a convincing platform for marketers.

Assuming your brand already has its own Instagram page, adding video advertising to IGTV and Stories is a great way to reach users who don’t already follow the brand’s profile. Users are accustomed to just scrolling through their feed without necessarily stopping, which is where Stories advertising can be more beneficial. Add hashtags and tag your brand in all video content to allow viewers to click through and discover with ease.

Pro Tip: Shoot video in the right dimensions. In-feed videos can’t be enlarged on Instagram, but in Stories, the video will fill the screen – designed to be filmed vertically. Add text where possible, and always place a call-to-action for the viewer to click through in the form of a more info link or a swipe up for more, which you can directly link to a website. 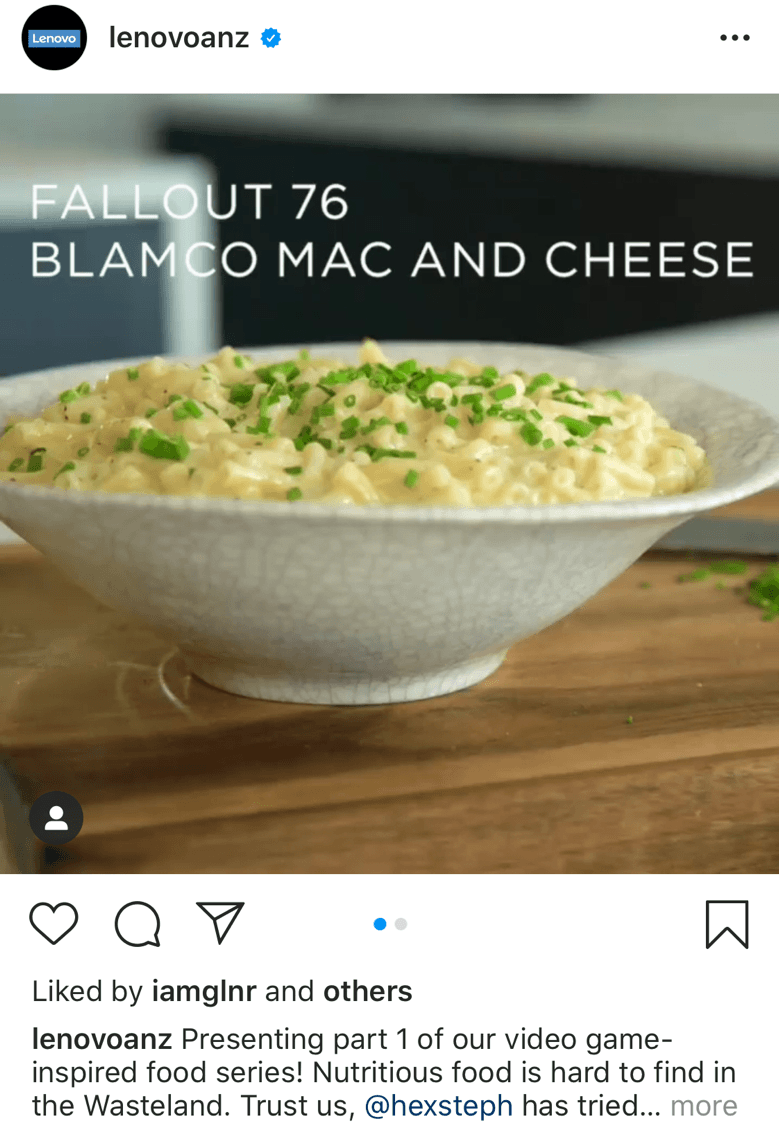 Two Giraffes produced a 3 part Cooking series for Five by Five Agency and Lenovo by creating recipes of meals from videos games. It was a great integrated approach to social media content and branding

In 2017, Google made changes the way advertisers can reach more viewers on YouTube. AdWords, an online advertising platform developed by Google, allows advertisers to pay for brief advertisements and video content, which installs key words within Google’s ad network.

One of the dramatic changes rolled out was that advertisers can now specifically target viewers based on their Google search history in addition to their viewing behaviour on YouTube. Pretty scary to the consumer, but to a brand advertiser, scary equals views which hopefully turns into dollars.

In a nutshell, marketers can now target ads to people who have recently searched for a similar thing, which means if the content of a video ad is closely related to something they’re looking for, they’re more likely to watch the whole thing and potentially even click through to the website.

What this means for your branded content is that if it’s appearing as an ad on YouTube before a video plays, you’re likely to target your audience without having to try too hard or spend extra money.

Pro Tip: Test your audience. If you’re running multiple versions of a brand video, keep the targeting and messages the same with varying levels of productions values for each video. Once your engagement begins, you’ll be able to see which version outperformed the others and tested best with your audience. That’s the one you should focus on.

About a year ago, TikTok, an app that allows users to edit and share 15-second videos, exploded, and was widely regarded as a tween / teenage platform. But, as its popularity grows, more celebrities and brands have jumped onboard the TikTok train to attempt to target even more consumers and it’s 500 million active users worldwide. 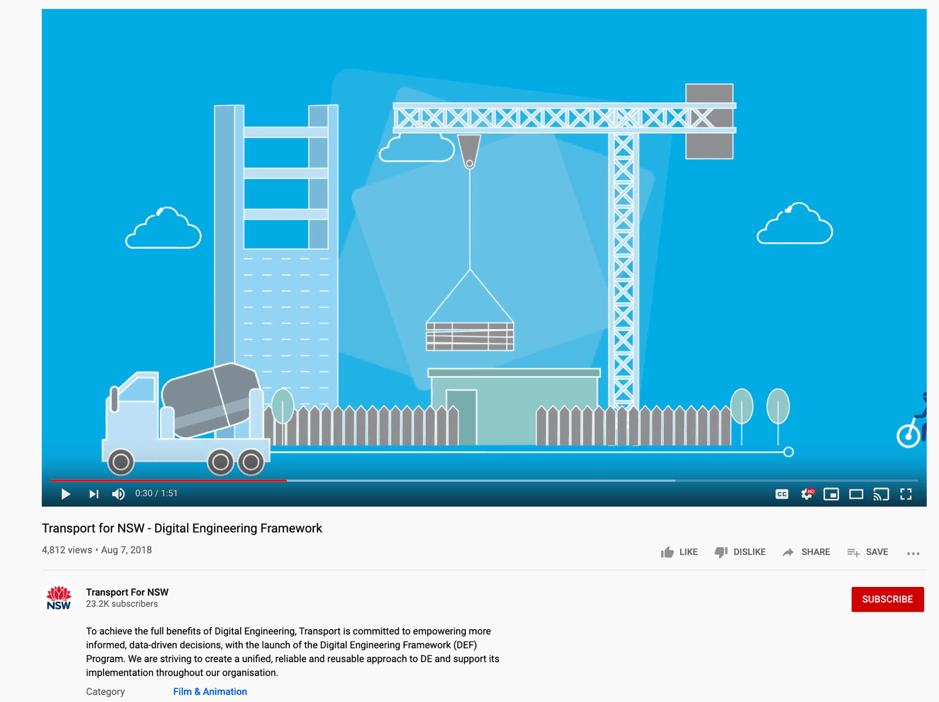 Two Giraffes produced a 3 part series for Transport for NSW which became the key to explaining their new framework to their offices all around NSW.

For these views to translate to sales, your brand would need to be specifically targeted to the majority TikTok audience. Brands like Nike, Apple Music and Rihanna’s Fenty Beauty have achieved great results, as their core audience are younger than 30. Currently, 66% of TikTok’s users are under 30, with 41% aged between 16-24, so it’s probably not the right platform to cater to an older audience.

Similarly, SnapChat advertising primarily targets the mobile-first generation. On average, there are around 218 million SnapChat users daily, but users can skip viewing ads if they want. Unless they’re searching for content in SnapChat’s stories, they can open the app, snap, send, view and go without seeing anything other than what they choose.

Pro Tip: Where possible, and only if it is an appropriate fit, collaborate with TikTok or SnapChat influencers that will target your demographic. This will increase your reach and engagement.

Got a project you think we could help with?